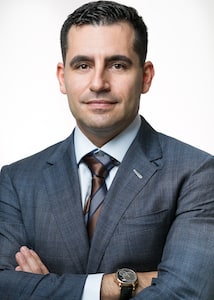 Adam Gana is the managing partner of Gana Weinstein LLP. His practice focuses on all aspects of securities arbitration, complex commercial and business litigation. As a seasoned trial lawyer, Mr. Gana's experience includes litigation in both State and Federal Courts as well as in various alternative dispute resolution venues. As lead counsel, he has tried more than forty cases to verdict before the state and federal trial and appellate courts, AAA, JAMS, NFA and FINRA and has settled hundreds more cases through mediation and direct negotiation.

Mr. Gana was named in the New York Super Lawyers Rising Stars® for eight straight years (an honor given to the top 5% of attorneys), ranked AV® Preeminent™ by Martindale - Hubbell™ (the highest honor offered), and ranked by the National Trial Lawyers as one of the Top 100 attorneys in the state of New York.

University of Vermont
Bachelor of Arts

Mr. Gana has actively committed to various pro bono matters throughout his career. He has dedicated hundreds of pro bono hours to inMotion, Inc. an organization designed to help women victimized by domestic violence. In addition, Mr. Gana represented a death row inmate in Alabama throughout the appellate process. Mr. Gana also taught rhetoric and debate to high school students and regularly guest lectures at law schools throughout the country.

Contact Us
Practice Areas
Recent Results
View More
Client Reviews
★★★★★
Thank you Adam and all your colleagues for the professionalism and diligence in the final settlement of our securities fraud case. When a past law firm group turned our case down, you and your firm took on the case and we thank you for the great outcome. We would highly recommend your firm. Gloria K.
★★★★★
I will never forget how much you helped me by winning my case! I never thought I would see any money from my investment. I admire the way you fight for everyday people against big companies. Thank you so much! Myra W.
★★★★★
Adam is an outstanding lawyer. I have worked on several cases with Adam and look forward to working with him again in the future. Rob D. - Co-Counsel.
★★★★★
If you want an attorney that is easy to talk to and genuinely cares about your legal situation, contact Adam Gana. He helped me settle a difficult contract dispute. When you work with Adam, he makes you feel as if you are his top priority. He will call you regularly to stay on top of the situation and submits all necessary legal documentation in a timely manner. His writing is excellent, his demeanor professional, and his work exceptional. Nancy N.
★★★★★
Adam helped me recover money from my broker when I thought all was lost. My house was about to be foreclosed, and I lost everything. Adam came in and saved my life. Jean C.
View More
Submit a Law Firm Client Review